Hubble, probes to the planets etc

The images from closest approach are now on line here, with more to come over the next few days.
David Entwistle
Top

Sure is an odd looking thing.

I've seen speculation that it was originally two separate bodies, which have now become joined to form one elongated object. It seems an odd physical arrangement for two bodies, which are attracted by gravity, to become attached along the longer axis of one body - not normally a stable arrangement with minimum potential energy. I suppose I should also consider the rotation of the system and then the arrangement may make more sense?

It's been pointed out, on the minor planet mailing list and probably elsewhere, that there are interesting similarities between Hartley 2 and the images of comet Itokawa returned by Hayabusa. 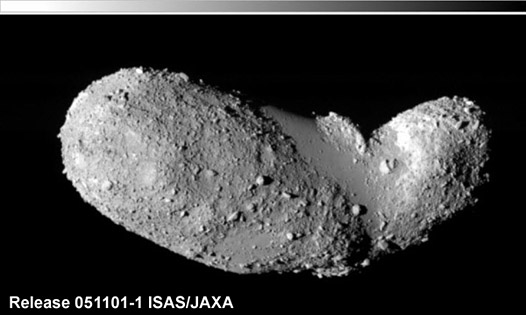 These objects are too small to form into spheres, so they tend to be elongated.
It's been suggested that the comet consists of two conjoined nuclei.
brian
Top
Post Reply
5 posts • Page 1 of 1