Astro software and whatever hardware

Just a moment ago Kaustav and I tried something silly. He had his webcam in his 'scope and trained on Jupiter. He then called me using Skype, turned on the video feed and.... in my copy of Skype here I could see Jupiter (which was nice, 'cos I'm clouded out right now). The image wasn't amazing, but it was Jupiter with the two main dark bands showing.

Here's a screen capture of the second attempt. The first was slightly better (although Jupiter was smaller) but this isn't terrible in that you can see that it is Jupiter (click on the image for a full size version):

Hi Dave,
That was quite an interesting experiment! I have done this on Yahoo messenger before and it worked out really well but this was the first time I tried relaying images from my telescope in realtime over Skype. It worked out quite well I thought. It's a shame the Philips Toucam doesn't show a very sharp real time image. The real detail only cames out after processing. 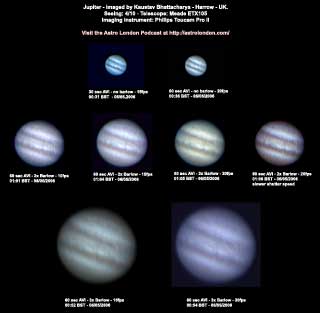 After imaging I took in the view with my eyes through the telescope instead of via the laptop. The four moons were lined up in almost a straight line. It was quite a spectacular site.
Kaustav Bhattacharya
>> http://kaustav.uk.com/unisphere/ - An online magazine about Astronomy, Science, Social Media and Society.
>> Follow me on Twitter @jupiterorbit
Top
Post Reply
3 posts • Page 1 of 1

Return to “Computers and astronomy”